City Green Comes to Life at the Dallas Arboretum

Laura Bush, the former first lady, visited the Dallas Arboretum during their special “Storybook Playhouses” exhibit. She mentioned that City Green was one of her favorites, and sent a letter thanking DyAnne for sending her book. 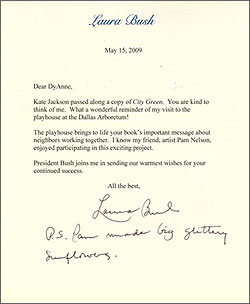 Kate Jackson passed along a copy of City Green. You are kind to think of me. What a wonderful reminder of the playhouse at Dallas Arboretum!

The playhouse brings to life your book’s important message about neighbors working together. I know my friend, artist Pam Nelson, enjoyed participating in this exciting project.

President Bush joins me in sending our warmest wishes for your continued success.

A 25-foot tall ship could seemingly take you to Neverland. A humongous, curved structure conjures up an image of a certain fruit featured in James and the Giant Peach. A little hut with whimsical features suddenly transports you to a world of talking trees in The Lorax.

And just a little further down the cheerful path are two urban homes flanking a little garden. Children are asked to read a synopsis of City Green — a story in which one little girl gathers neighbors to create a community garden in a ghastly gap left behind from a torn-down home. Then the children are invited to take a stroll into another world.

All of these magical creations are part of “Storybook Playhouses,” an exhibit at the Dallas Arboretum that opened last week. Each one was designed by a different architecture firm in an effort to promote literacy and launch the 25th annual Dallas Blooms.

Although City Green isn’t the most well-known book, its message is evident in the structure created by La Terra Studio, a downtown landscape design firm.

“As cool as we think ours is, it’s not elaborate by any means,” said Michael Black, principal at La Terra Studio. “You don’t look at it and think, ‘Wow, that cost a fortune.’”

“It was a volunteer effort in the storybook, so it definitely has that volunteer feel to it,” he said.

The theme of bringing the community together ran straight from the pages of City Green, DyAnne DiSalvo’s book, to the garden scene at the Arboretum.

“One of the things we wanted to portray to kids and visitors to the Arboretum is the story and the moral of a story that a community really can change,” said La Terra designer Dustin Bullard. “They can change a community, whether it be a little vegetable garden in the backyard or a huge community garden down the street.”

Back in August, when the group first decided they wanted to submit a proposal to be considered for the Storybook Playhouse exhibit, they had no idea what they were getting into, or how they would be calling on others to help.

The first volunteer was Bullard’s mom, a teacher in Texarkana. She is the one who suggested the book City Green. After that, friends were asked to donate time; dads were summoned not only to store the structure in a shop, but to move it to the Arboretum; coworkers and former employees loaned extra hands and extra materials; and even artists were called on to donate their skills.

“They’re really glistening,” she said. “My big concern is you never know about wind. A few petals, I don’t know if they’ll go. But nature doesn’t have a perfect sunflower, either.”

The masterminds behind City Green are hoping no one will notice a missing petal. Instead, they’re looking forward to the reactions from the kids as they walk through the creation.

“It’s been a lot of fun to watch the kids play around it — knock on the door, and try to get in and all that — and watch their interaction,” Bullard said. “As much work we have put into it, it really is gratifying to have parents and kids come up, read the story and synopsis, and walk around.”

But something that took City Green to another level was talking to the inspiration behind it all — the author, who said she was elated when Bullard told her they were creating her illustrations in 3D.

“To think, they’re going to build something that children can walk through. I was thrilled,” DiSalvo said.

The Pennsylvania resident said she planned on coming to Dallas in the fall to give presentations at schools. But she won’t have to wait until then to see the interpretation of her story. Bullard’s been sending progress updates throughout the whole process.

This site uses Akismet to reduce spam. Learn how your comment data is processed.